The image format that you choose for your render can greatly change the way your final product will look. Images can be compressed to save disk space with lossy formats, while lossless formats sacrifice space for quality and fewer encoding artifacts. So, which is the right way to go about rendering your image?

First, it’s important to take into consideration how you will be using the image.

It’s simply not possible to provide a specific format solution for every way you might use a rendered image, but by understanding the strengths and weaknesses of lossy and lossless image formats, you will be equipped with the ability to choose a format that’s best suited for your needs.

Lossy image formats use compression, which means that every time a change is made to an image, the image is degraded further, until finally the image is no longer usable due to the large number of image artifacts created by too much editing and repeated saving. Ideally, it’s best never to edit image formats with lossy compression.

Lossless image formats use no such means of compression. These formats store all the information from the original file transfers. No matter how many times you save or modify a lossless image, it will always maintain the same quality. These formats are usually used for larger scale, more composite, post-production heavy projects. When using third-party image and video editing software such as Nuke, After Effects, or Photoshop, you’re able to save, modify, and convert images without fear of compromising the quality. The only catch is that all of that data may be overwhelming to your workstation due to the potentially large file size.

Compared to lossless image formats, the advantage of lossy formats is that the results produce a much smaller file size, saving disk space and making uploading to social media or sending the files as an attachment via email much faster. It’s recommended to use a lossy format for the final render rather than a lossless format, especially if you have no intention of further editing the image.

Now that you know the difference between lossless and lossy formats, it would be a good time to talk about compression. What does file size mean exactly?

Lossless image formats actually use a form of compression, but it operates in the same way as a ZIP or RAR file. It compresses the file size when not in use, but extracts that internal data to the original size when it’s opened up again. Obviously, file sizes vary from image to image, as well as format to format, so there’s no telling how much file space you will save with compression. No matter what amount, lossless formats will always maintain its original output quality.

Lossy file compression works differently and usually saves you a much larger amount of file space than lossless compression. As mentioned earlier, you really shouldn’t ever use lossy image formats while still in the post-production phase as the constant saving and editing can greatly decrease the quality of the data. Of course, exporting to a lossy image format as your final image output is a very fine solution for larger endeavors.

Below is a table of Blender’s available export file formats and the output compression quality of each to help you remember which image formats work best at any given stage of your project. (Be sure to bookmark this page for later reference.) 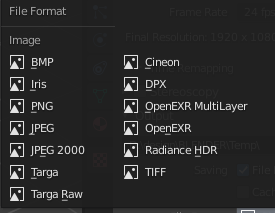 Continuing on the subject of post-production, another issue that larger projects have are render passes (AOVs) and renders that contain alpha channels. Alpha (transparency) outputs are often used for masking and compositing in post-production. It’s much more common now, but there are still only a few image formats that currently support it. The JPEG format, most notably, does not. The growing popularity of PNGs is tied to this, as it’s comparatively just as small of a file size, while also allowing for an alpha channel.

Used more for animation, image formats with render passes are definitely not very common. There are many passes that do fundamentally different things (some having alpha channels and some not), and very few formats can support that. In regard to Blender’s image export, only the OpenEXR Multilayer format currently supports render passes. Upon export, OpenEXR images send all selected passes to the Render Layers panel in the compositor to be used in VFX or image editing software. The only way to get each pass is to extract each one in a separate, animated file, and apply their use in either another Blender compositor or another editing software.

Choosing Between Lossy and Lossless Formats Depends on Many Considerations

Exporting images in Blender comes with its own unique set of options and file formats that give designers a level of control, which can assist them in finalizing an image for post-production in print, video, and more. Larger projects and design teams rely on this process more than independent creators and hobbyists, but even new users to Blender should feel comfortable understanding these image formats as they can help you make better decisions when preparing your final render.

We hope this overview of lossy and lossless formats helps you to understand why it’s important to consider how you save your Blender files going forward. Countless production hours can be permanently undermined even after saving if the wrong format is chosen. For more tips, tutorials, and information on getting the most out of Blender, be sure to check our growing list of Blender how-to guides.