With 2020 coming to a close, there’s no better time to reflect on some of the year’s best highlights in GPU technology: The release of Radeon’s powerful RX 5000 and 6000 series and NVIDIA’s hefty GeForce RTX 3000 series.

We’ve compared GPUs in the past, but this time we’re going to test the performance speed of the most advanced technology and architecture that Radeon and NVIDIA currently offer to help you decide which is right for you.

In our last speed test, we compared what was considered to be the most powerful, yet most affordable options available to consumers at the time. Here, we’re focused on the cream of the crop — the best of Radeon and NVIDIA’s 2020 products. As you can see below, prices vary widely for the models we’re comparing, but our evaluation is specifically based on how fast these GPUs can perform.

Putting aside third-party rendering engines, like Radeon ProRender, that are steadily increasing in their capabilities, rendering in Blender relies on either the Cycles or Eevee engine — Cycles for its ray tracing and photo-realism, Eevee for its swift rendering times and game-ready asset building capabilities. So, what’s the best GPU out there that can give you the fastest results?

As with the last comparison, the Xbox controller scene below was used to evaluate the power and speed of each GPU on our list. Though the controller was modeled in Cinema4D, the scene was animated and rendered at 4K resolution using Blender. This free and open source .blend file was created and made available by Reddit user u/ftolber on the r/Blender subreddit. 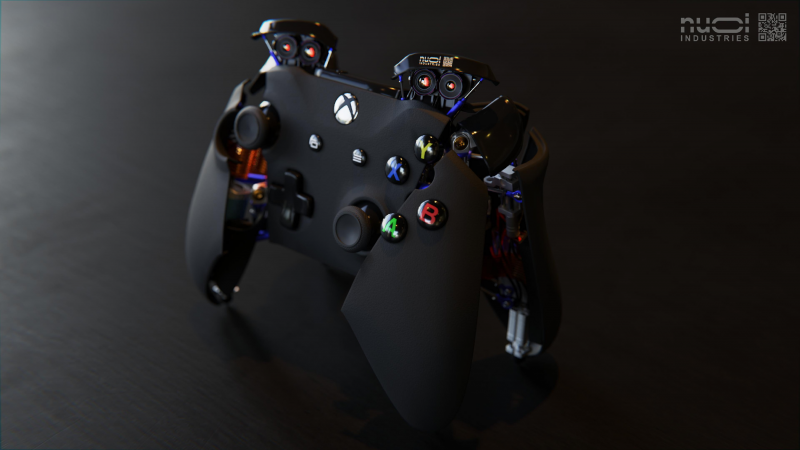 When rendering in Cycles, it’s always important to pay attention to your sample rate and your tile size. The more samples you have, the higher the quality of your scene, but the longer the rendering time and the more taxing it is for your processor. Tile size also plays an important role in the expediency of the final render. The larger the tile size, the fewer processes the GPU has to compute.

NVIDIA demonstrates its power loud and clear according to our results. The GeForce RTX 3090 is a force of nature and beats out Radeon’s best-performing RX 6800 XT by 44 seconds. The 6800 XT is still very impressive, though, and its performance slightly improves from the earlier 5700 XT model.

Eevee is a physically-based real-time engine unlike Cycles, which is a ray tracing engine. It’s preferred by some designers because of its speed and ease of use. Eevee also exclusively harnesses the power of the workstation’s GPU. Which GPU makes it go even faster?

These results are definitely more surprising than the Cycles test. It seems that the GeForce RTX models don’t have quite as sharp of an edge with Eevee as they do with Cycles. However, NVIDIA’s RTX 3090 model is still the victor, outperforming Radeon’s RX 6800 XT model by a steep 61 seconds, but Radeon’s hardware is still quite the contender. Compared to our previous generation GPU rankings, both Radeon and NVIDIA show a great increase in performance and speed with Eevee, overall.

Beginning with Blender’s 2.8 build, the software introduced a new lookdev mode for both Cycles and Eevee in the viewport called Material Preview. This mode applies materials, textures, and modifiers to objects in the scene with an impressively accurate approximation of the lighting and shading processes right there in your viewport, without having to render the scene each time you want to see what it will look like with the final render. This means that powerful GPU processing is necessary to take advantage of this feature. With the release of Blender 2.9, how does Radeon and NVIDIA’s newest hardware compare when working with processor-heavy operations running in real time?

In most instances, whether you’re into visual production or gaming, the average minimum benchmark to meet is a steady frame rate of 60 FPS, which Radeon’s 6800 and 6800 XT seem to be capable of doing at 1080p in Blender’s viewport. This is definitely an improvement over the previous generation where Radeon’s hardware topped out at around 50–57 FPS. This test, however, is once again NVIDIA’s victory, with the GeForce RTX 3080 model at an impressive 96 FPS, surprisingly only losing to the 3080 and 3070 models, both at 97 FPS.

Though these comparisons focus on rendering performance, there are still other factors to consider when choosing a GPU, such as viewport performance, OptiX, and AI denoising.

NVIDIA’s GeForce RTX 3090 is indeed the most powerful, but it’s also the most expensive model. If you’re looking for the best of the best, but at a more affordable price, we suggest going with the slightly less powerful RTX 3080 model that is still almost as impressive while coming in at less than half the price.