Arbitrary Output Variables (AOVs) provide custom render passes for arbitrary shader components. This can be a good way for artists to debug or tweak very fine details of a scene in post processing.
There are a variety of elements such as direct and indirect lighting, reflection types, ambient occlusion, and more.

These render passes provide more control over composite and rendered images and are a more affordable option to re-rendering the full image when only small changes are required, such as adjusting the lighting, changing the background of a scene, or merely adjusting the colors.

With that in mind, it’s much more efficient to use your preferred compositing software to modify the isolated paths and recombine them to obtain a final neat image. In addition, render passes can be used to achieve effects that would be difficult or even impossible with physically based rendering.

How to Include an AOV Pass in Render Output

To save the render pass in a single EXR file:

1. Check the passes you would like to create on the AOVs tab located in Render Settings. 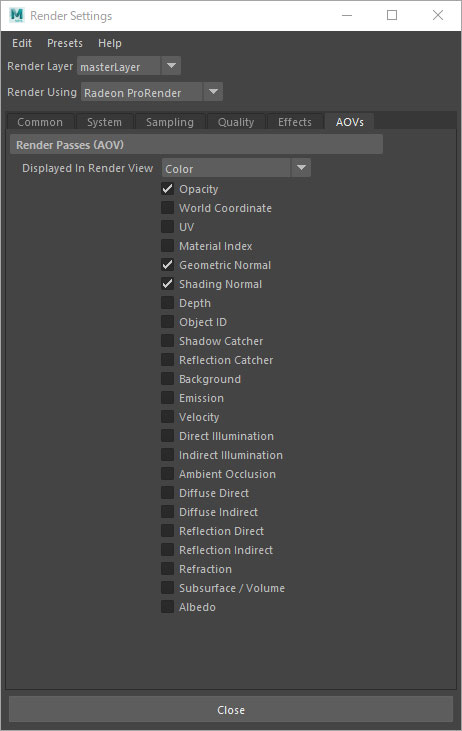 2. On the Common tab of Render Settings, select “EXR(.exr)” for Image Format and check Save all AOVs to multilayer Open EXR. If this option is disabled, each render pass will be saved as a separate EXR file in a subfolder. 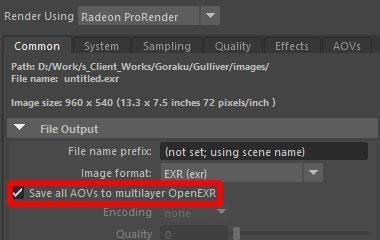 By default, the Color Pass is displayed when rendering an image in the Render View window. To render another pass in the render viewer, select it in the Displayed in Render View list.

The opacity pass renders alpha channel information for objects in a scene. This path is a grayscale map in which fully opaque objects are shown in pure white while completely transparent objects are not. Intermediate opacity values appear as partially transparent gray shades.

The material index pass creates a mask of the material assigned to the mesh in the scene. This helps to separate the materials during compositing. Material masks are distinguished by different shades of red.

The normal path renders the actual geometry normals without smoothing based on the camera angle.

Shading normal indicates the distance from the camera to an object’s surface. This pass represents a shading map with a gradient from black to white.

The depth pass also indicates the distance from the camera to an object surface but represents a depth map with a gradient from black to white.

Object ID paths create masks for various objects in your scene. This helps isolate the objects during composition. Object masks are distinguished by different shades of red.

Not available at this time.

The background pass renders the background color of the environment or image-based ambient lighting as seen by the camera.

The emission path renders the output from the emissive object with an emissive type RPR material. This pass considers only the shader’s emissive component, but does not include information about how it affects the scene’s lighting.

The velocity path renders the color-coded direction of motion for an object that repositions between the current frame and the next frame. The RGB color values used to indicate direction correspond to XYZ coordinates. This pass only applies to scenes with motion blur enabled.

The direct illumination pass renders light directly into the scene from all sources and surfaces. Light that bounces off the surface of the object towards other surfaces is not considered in this pass.

The indirect lighting pass renders indirect light from all sources and surfaces. This path stores information about the light that bounces off the object surfaces in the scene toward other surfaces.

Ambient occlusion passes render complex interactions between the interreflections of objects in a scene. This pass stores information about soft shadows from global illumination at mesh intersections, cracks, or corners.

The reflection direct pass renders reflections on smooth surfaces such as specular highlights and hotspots. This pass considers only the first reflections from the surface and does not store information about bounce lighting.

The reflection indirect pass renders indirect light reflected from a reflective or specular surface. This pass allows for illumination after multiple reflections from the surface.

The refraction pass renders the light transmitted through the refraction material. This pass will show transparent surfaces and reflections, as well as objects visible through these surfaces.

The subsurface / volume pass renders the interaction of light with RPR volume materials and uber shaders, separating the subsurface components from the rest of the scene.

Albedo passes render the solid colors of object surfaces in the scene.